Thanks everyone for reading, and I will see you in Feb.!

Lego certified professional and creator of Mocpages, Sean Kenney (The man. The myth. The legend!), was commission in 2007 to create a mosaic for Google Inc. for their NY offices. When looking at it normally, it appears to be a normal mosaic,

But when you get close and look at it from a different angle, It is really just a bunch of random bricks, like doors and strange things all cobbled together to make a mosaic. Pretty neat huh? View the rest of the creation here.

Sean Kenney is one of my favorite builders, be sure to check out all his great creations and commissions by visiting his website: http://seankenney.com/

*** It should also be noted that Sean Kenney also made another Google Logo mosaic for Google Inc.'s Denmark office. Check it out here.
Posted by Casey M. at 8:44 AM 2 comments:

On the blog here, I have this little flickr stream down the page the has goes through all sorts of Lego mosaics on Flickr. One thing that I've seen come through there is this a mosaic of Campbell's Tomato Soup.

Created by TheWorldInBricks (or David Haliski), the mosaic is 30"x40" and is very impressive.

You can check out David's website here. Make sure you do so because he has some pretty sweet creations. In this one section you can interactively walk though a gallery. Incredible!
Posted by Casey M. at 9:45 PM No comments:

Continuing on our series of official Lego mosaic sets, we're doing a little half-way point between parts 2 and 3. While visiting http://thebrickblogger.com/ (great website, if you didn't see my post about it, click the link here), I was able to find a couple more variations of #3443. These I'm pretty sure these were a lot less common then the normal 3443 (the one with boy on it), but in my opinion were maybe a little cooler (sorry, Johnny Thunder is awesome!). Sources:
- Bricklink.com
Posted by Casey M. at 8:44 PM No comments:

Give me (Wings of) Liberty! Or give me death!

Continuing in our series of creations from Brickworld 2010, I stumbled across a Starcraft II: Wings of Liberty display by Pepa Quin (I'm pretty sure it is Pepa) displayed at Brickworld 2009 and 2010, from what I can tell. You may need to click on the picture to get a bigger picture of the mosaic in the display, by the way. Registration for BW11 got me thinking of my experience last year of going to BW10. There were a ton of cool mosaics there! I was looking around on the web, and I don't know how I missed this mosaic...

MOCpages user, Chris Phipson who posted a recap of what happened at BW that year, had a photo of this great SNOT tapestry. I can't tell it is based off an actual flag, or coat-of-arms of sorts (I don't know, maybe I'm just dumb ;0 ), but it looks great. Not sure who the actual builder is though...

I looked through pages and pages of the flickr stream of BW, but could not find the builder. (If you are out there, or know who built it, please come forth!)

By the way, I think I'll continue posting a couple of the mosaics I missed from BW10 as well as continuing our mini-series on Official Lego Mosaic Sets, not to mention, I'm planning another interview! Stay tuned...
Posted by Casey M. at 9:18 PM 2 comments:

Hello everyone, just wanted to inform you that registration for Brickworld 2011 is now open!

You might have already seen the news, but for those of you that are on the fence, I strongly encourage you to go. Last year there were two mosaic workshop classes, and at least 20 or more mosaics scattered throughout the rooms.

Not only will you see amazing mosaics, but run into cool AFOLs as well. Did I mention the huge presence of mosaics?

Yeah, I will be planning on attending (hopefully), I'm talking to friends, family, and my parents ;-D. But If I'm going, I need to get my butt in action (attendance for full registration is capped at 650, but we'll see how long that lasts ;-D ) because my friends and I have been designing a huge 3 ft x 3 ft display for BW!

There are already (within a day), almost 200 signed up, so if you haven't, do so! I haven't attended as a full attendee previously, only as a public day attendee, but the full sounds great!

Sorry about not getting that post of part 3 up, I had a couple things come up, but through a certain reader of the blog sending me a message of a certain website, it brought me to some great mosaic resources.

The website is called, thebrickblogger.com and has three great articles so far. They explain somethings better than I ever could! The posts are on:

- Resources for Mosaic Builders (Extremely useful!!)
- Mosaics & the Stained-Glass Effect (A great resource for different types of mosaics)
- A gallery of mosaics

The website, in of itself, is very useful in general, so go check it out! ;-D

Sorry about the long pause between our series and stuff. This week of school coming out of break has been horrible. ;( Don't worry though, more mosaic is on the way!

Continuing on in our series of official Lego sets, we have a most notable, rare, and illustrious set. The amazing 3443. If you happen to own one such 3443, that is something special.

Set 3443 Mosaic Set (Yes, same title, yet again!) was a set that came out in 2000, and was generally released with all other cool sculpture sets such as the Statue of Liberty, the Green Dragon, and the Maxi-fig. 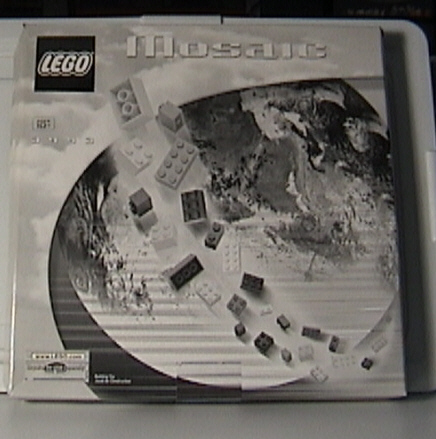 Above is the box it came in. It contained 1993 pieces which in it had a 48x48 baseplate. That's right. All that for $30. That's 2 cents per piece!! And over half of the piece were 1x1 black plates. A full inventory can be found here. I'm also pretty sure it taught you how to make Lego mosaics as well. The set was mostly sold in the Legoland Gift-shops, Lego Stores, and sold/traded on early Lego community sites. You can't even really find one these days.

Above is an example of what you could make with the set. I'd be really curious as how they'd make it. Now, on Bricklink, I believe this set is categorized as k34434, which I think it means that it is the same set! Look below... In this picture you can see the pieces that they used to create the frame as well as how they used a different image then a child.

Set 3443 is quite awesome. I'm not sure if there would be quite a reason to get one know, but it's just really cool. ;-D Probably one of the best Lego mosaic sets.

Thanks for reading, come back on Sunday for Part 3 of Official Lego Mosaic Sets.

Beginning in 1984, we saw the first ever official Lego mosaic set!...well...Duplo set...well...not even that either being labeled as Dacta! Set 1012 titled: Mosaic Set, marked a new era of mosaics!...sort of!

Anyway! Today we're starting a new series sort of thing of official Lego mosaic sets. I'm going to have it sort of like a mini-history of kits produced. Let's get back to it! ;-D

As you can see from the picture above it, consisting of several 2x2 printed tile pieces (in Duplo dimensions) and a small red baseplate, was the first official set produced by the Lego company as far as I can tell. Although, I'm pretty sure that mosaics were built by the company, but not put on shelves or anything. No retail price on this, but I would think that it would have gone for maybe $10, $20, possibly $30 during its time.

When I first uncovered these Dacta sets, I knew they looked familiar. And they were because my library used to mount several of this next set on the wall with tubs underneath them. (that or they were knock offs :-P ).

Set 1000, again called Mosaic Set, was basically the same thing as 1012, except released in 1986 had a lot more pieces and a bigger sized baseplate. And this one had a retail price at $46.75. It was quite a step up from the previous set with having idea panel/book things.

And lastly, just to tie things up, in 1987 there were a couple more sets released with animal-like themes, for example:

Anyway, here's a little brief thing on mosaics, and I'll have more in-depth parts later on. This one was a bit informal, but informational. I hope you enjoyed this, and are looking forward to later ones!