Thorsten Bonsch (Xenomurphy) has accomplished what is probably the most artful use of scattered bricks that I have ever seen. The lighting and the positioning are so incredibly perfect.  Beautiful!

Here is a close-up of the scattered bricks:

Really cool --  except that now I'm itching to start organizing all those loose bricks.  ;-)


Thanks to Medieval Guy for the tip!
Posted by Katie at 8:00 PM No comments: Links to this post 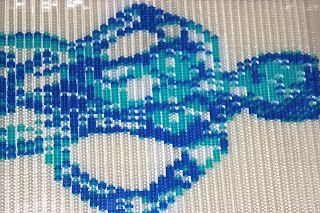 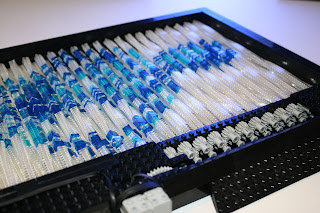 Thanks so much for reading!
-S&C
Posted by Siercon and Coral at 8:50 PM 3 comments: Links to this post

I run into periods of time where it's hard to keep up with this blog, but Bruce always keeps me on my toes!

About these first ones, by Brickshelf user Elena, he says they are simple but fun, and that he particularly likes the dragon: They are all so super-cute!  I notice some clever techniques on the rabbits, too.  There are transparent bricks used for slight shading, little lever bits for eye brow highlights, and grill plates on the carrots for texture.
Bruce also sent a link to Pete W.'s photo of a LEGO mosaic "with added 3-D fish, on the stairway to Hobbyco's second level."  I like the little sea horses.  They're so.... cute!
﻿

Posted by Katie at 7:38 AM No comments: Links to this post

HispaBrick Magazine is a free magazine written by and for LEGO fans.  The fifteenth issue became available today.  I noticed that on page 29 there is an article written by a Portuguese AFOL about building LEGO Mosaics.  I found it especially interesting since the author, Pedro Almeira, suffers from Congenital Muscular Dystrophy.

You can find the preview of the English version of the magazine here.  (HispaBrick is also available in Spanish.)  There you can download a free PDF of the entire magazine.

If you read Carlos' editorial (right after the table of contents), you will see a reference to "our U.S. correspondent" (that's me) and something about "opening new horizons for the magazine".  Essentially that means if you have great ideas for articles, let me know!  You could write them, or I could help, or we could pass the ideas off to someone else.  And then you could be a correspondent too.  Come.... join us!  ;-)
Posted by Katie at 7:54 PM No comments: Links to this post

Check out the interior on this Mysterion Mothership by Crimso Giger. I think that might be the sweetest inside of a spaceship that I ever did see.  Though, as my friend Scruffy Mynxbane says, "My eyes are now two smoldering craters."  Mine too!

I see no exterior, just a promise that more is come tomorrow.  I guess I'll have to pay attention.
Posted by Katie at 4:55 PM No comments: Links to this post

Bruce sent me a link to this cute Sesame Street Mosaic by "Big Daddy" Nelson:

I can think of a number of children who would love to have something like this hanging in their room.
Posted by Katie at 2:19 PM No comments: Links to this post

There is a currently a LEGO Christmas Village set up at Time Square in Hong Kong.  You can read an article and watch a video describing it in more detail here.  The models were originally designed by Hong Kong LEGO fans, and then built at a size about 20 times larger than the originals.  Bill Toenjes (TooMuchDew) sent me one of the photos, because.... look!  A giant cheese slopes mosaic!   I assume (hopefully correctly) that the design was based off of one of one of mine.  In which case -- how cool is that? I noticed this other beautiful snowy/starry mosaic background in the photographs taken by Joey Kwok (Bo-Chi Workshop). In the video mentioned above, I saw a few more really neat mosaics, too, although I didn't find still photographs of them.  Since my birthday party is about to start, I will leave it to you, intrepid reader, to watch the video and look for them yourself.  ;-)
Posted by Katie at 6:18 PM No comments: Links to this post

Check out the cool technique used on this traditional mask of old Korea:

Here's a close-up of the technique used:

Via LEGO Diem.
Posted by Katie at 6:31 PM No comments: Links to this post