Last night I went out to the Red Robin in Kennewick, WA, with my family.  (For the record, this is the restaurant where I first met my husband; match.com did it's work well!)  My 3-yr. old son was throwing a fit that he had to leave the racing game in the entryway to go sit at a table, so I had to take him out into a little anteroom.  That's the only reason that I happened to notice that the large picture of the Red Robin character on the wall was made completely out of LEGO.

Here's the photo I took, showing my fussy son, who did not seem nearly as thrilled about finding this mosaic as I did. It was done by Laura Munger (lachme), who has done quite a few other mosaics.  She has a blog and a flickr account, where you can see some other things that she has done.  She talks a lot about her mosaics on her blog, including a fun story about this particular one:  "i was working at the red robin at this time, and decided to make a red robin cartoon for my next project. once it was finished, i brought it into work and showed my it to my manager. i told her she could buy it for her store if she wanted, or if not, i could take it home and take it apart . . . and no, i don't consider that blackmail, just good negotiations. i sold that mosaic to red robin for $1600."

Another of the mosaics I found that I really like is this Washington State University cougar logo: 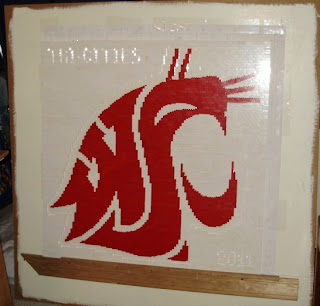 I'm not a Cougar myself, but my brother, sister, husband, brother-in-law, sister-in-law, and various cousins and friends all went there.  This mosaic has the "Tri-Cities" label in the corner.  The WSU Tri-Cities campus is right across the river from my parents house, and where my daughter's ballet recital was this spring.  Laura said she was donating this mosaic to the WSU Tri-Cities campus.  You can read more about this mosaic here.   [I am perhaps a bit overly-excited about this, but it's just so rare to see anything LEGO-related that has anything to do with my real-world life.  Bear with me please!]

The blog also has a lot of interesting ideas for LEGO clocks, which you can see here.  I think this is my favorite: 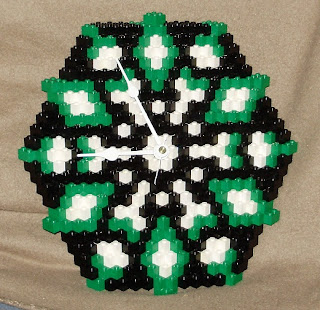 I love geometric designs, and I also love the clever construction technique, of stacking them like q-bert cubes.  I suppose the only potential problem with this would be that the white hands of the clock tend to blend in with the white bits of LEGO, making it hard to see what time it is.  But that's a minor point in a nifty design. Looking forward to seeing many more! If you know of one not shown here, let me know! Shoot us an email to mosaicbricks(at)gmail.com! (just remember to replace the (at) with @).
Posted by Casey M. at 10:14 AM No comments:

Brickworld 2012 Mosaic Round up!

Brickworld 2012 was the best Brickworld yet (or at least, for me, Casey, it was). Lots of laughs, learning, and (of course) Lego! Mosaics had a great presence this year with some great jaw-dropping-how-the-heck-did-you-make-that-creations. Most of these where taken on the 3rd day of the con (Friday) and some were taken on the 4th (Saturday). I tried to write down all the names of the mosaics and the names of the creators, but I misplaced a few. Let me know if you know any of the names. Thanks. And yes, this is about 2 weeks over due. ;-)

To start, Arthur Gugick brought his large amount of mosaics, most or all of which have been posted on MB before (or might as well have). The winner of the best art work went to Arthur Gugick's Anakin/Darth Vader Mosaic that was previously shown in our blog under the image-changing cheese slope post.

Mariann Asanuma of Model Building Secrets brought a recreation of Raising the Flag at Ground Zero.

Sharon Vana? (unconfirmed) brought two Legend of Zelda mosaics. One of Link, and one of Zelda.

Here's a photo illustrating the technique. The mosaics are built diagonally.

A C3PO mosaic was built by Sean Jensen.

I couldn't get close enough to read the inscription of the following mosaic or find the MOC card, but here's a mosaic of a labratory...building...thingy. Let me know if anyone knows the builder...or creation. ;-D

UPDATE: Dave Kaleta brought the Lab School Mosaic. It has a really neat story so check it out here!

Judge's award went to the The Day the Earth Stood Still mosaic by E. J. Bocan III. The technique used to make it is the same as the Captain America and Iron Man mosaics.

Chris Rozak brought a mosaic of the Nyan Cat.

A mouse cursor was brought by Dr. Church.

Becky Weis, apart of Brickology created a large Brickworld 2012 mosaic logo over the course of the convention made entirely of 1x8s.

Roy T. Cook brought a mosaic called Alice. The photo has been cropped for obvious purposes, as well for the public. A neat part of this mosaic though is that four panels all bend into one focal point.

A Lego logo mosaic was apart of a micro city display. (if anyone knows the builder, let me know)

Tyler Halliwell brought a very large mosaic of Fashionable Bridge by Vladimir Kush. My photo turned out blurry, so the photo below is Tyler's.

A Canadian flag was brought. (once, again not sure who!)

Overall, a lot of great mosaics this year! Congrats to the winners.

Joshua Christenson made this beautiful sillouette of a stallion rearing up in front of the sunset. I really love the contrasting colors, the relief techniques, and the nicely shaped horse.
Thanks to Bruce for the tip.
Posted by Katie at 2:36 PM No comments:

Awhile back Casey posted about lenticular ("morphing") mosaics.  These are mosaics that change depending on the viewpoint.  Daniel Stoeffler, who made the Harry Potter/Voldemort mosaic, let me know that he has written up a post on MOCpages about how he made this mosaic.  Unlike the other two mosaics shown in Casey's post, this one uses 45 degree slopes and inverted slopes instead of the 30 degree cheese slopes.  The following image shows the basic idea of how it is done.

You can read the post on MOCpages for a much more complete description of the process.  ﻿
Posted by Katie at 10:28 PM No comments:

Ryan McNaught (The BrickMan on flickr) made this series of mosaics for his two boys.  Each one shows one of their favorite animated characters.  I really love the vibrant colors. As an aside, Ryan is Australia's first and only LEGO Certified Professional.  He recently finished a beautiful, 200,000 brick Colosseum, which you can see here.  ﻿
Posted by Katie at 5:56 AM No comments:

Do You Believe in Magic?

I'm always a sucker for mosaics that are incorporated into larger MOCs.  I have no clue what is going on here (although Matt did link to a YouTube video), but it seems really compelling.  There is a very interesting contrast between the opaque pastel circle and the fiery transparent flamey bits.  Then there's the other contrast between the butterflies-and-roses feel of the mosaic and the gas-masked figure.  And there's also the contrast between 2-dimensional background and 3-dimensional foreground.  I'm not much of an art critic, but this one has me babbling on like I think I know what I'm talking about or something.

Anyway, that was a long introduction to say that Matt De Lanoy (Pepa Quin) made this Pyrovision: