Dark Side of the Moon

Isaac Mazer (Ricecracker.) made this beautiful rendition of the cover of the Pink Floyd Album Dark Side of the Moon. Here is the original for a comparison:

I love how Isaac used white, trans-clear, and trans-black pieces to achieve gradations of color.  Using black can help to cover up imperfections in a cheese slope mosaic.  If you look closely at the largest sizes of the photo, you will see that there is even a modified plate with a door rail with the rail part filling up a small area.  In another color this might be more obvious, but with black it all blends together and looks great.

Thanks to Simon for the tip!
Posted by Katie at 9:25 AM No comments:

The Glowing Killers in the Dark

Flickr user bruceywan made a glow in the dark mosaic using 1x1 rounded plates (as well as some regular plates) of the band, The Killers. Check out Bruce's website here. I found it to be great idea.

For his first mosaic, Joel Midgley (Greybrick) attempted to recreate the cover of the U2 album War. He used a studs-facing-up-and-occasionally-sideways (but not out) method to get a higher level of detail.  I also appreciate the cheese slopes he used to make more precise angles in the font.  ﻿
Posted by Katie at 6:22 AM No comments:

Ivan Angeli (Angeli ¥) made this mosaic using transparent bricks in contrasting colors.  The final result is quite interesting. Sailing Off Into the Sunset

Bruce writes to say that he thinks the use of color in this mosaic by Brickshelf user awis is quite striking: It reminds me of another great MOC by -infomaniac- that uses mosaic techniques to create the effect of a sunset: Mariann Asanuma has a mosaic-filled post on her blog, ModelBuildingSecrets.  She describes everything so well on her site that it would be redundant to do it again here.  So -- go check it out!
Posted by Katie at 8:12 AM No comments:

Well, school has finally started and I've begun to get back in the swing of things. A while back, I received a post on the blog about a CUUSOO project. I've been meaning to talk about it, but I had been really busy.

Anywho, so this project could really interesting and/or useful for both mosaic and castle builders, and I'm sure it could translate into other themes, as well. A user named Nachapon as been creating these renderings for some intuitive part designs. The project featured is titled: Lego Tessellation Tiles New Bricks Design. Take a look below: 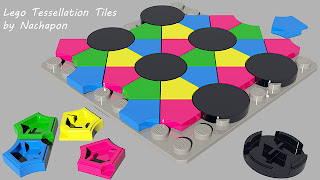 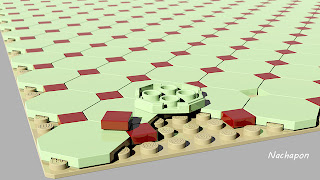 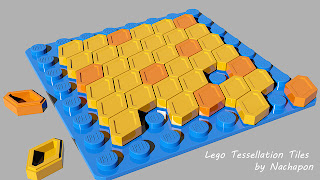 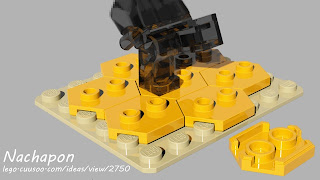 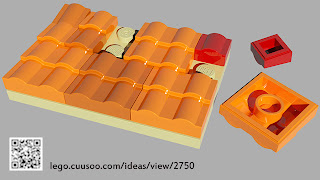 I think my favorite project would probably have to be the first one pictured. It would be great for a throne room, in my opinion. Or perhaps a ballroom. These would all have to be used for studs up mosaics, but I still think they'd be great for adding sharper details and possibly texture. Thanks to Nachapon, for letting me know.

As far as the likeliness of this project succeeding, I'm guessing it'll be pretty low, since we haven't quite seen a single part(s) project succeed yet. So, who knows. I would love to see these integrated into a set, though. Best of luck, I supported it. ;-) And you should too! Check it out here and the rest of Nachapon's projects, which are really creative.